The nation’s largest workers’ compensation community came together recently in Dana Point, California to attend one of the country’s more prominent trade conferences. To kick off the event, a panel of work comp subject matter experts, representing system stakeholders and employers, was assembled to address issues ranging from California’s chief public official’s appetite to tamper with seemingly sound system reforms to automation and technology’s role in workers’ compensation.

The panel was moderated by Kurt Leisure, The Cheesecake Factory Vice President of Risk Services and included:

The following is a synopsis of the panel’s reaction to key issues raised during the conference’s opening session.

The Governor’s Agenda for Workers’ Compensation

Question:  The California workers’ compensation system has been through multiple reforms over the last decade, do you feel that our new Governor’s administration will “turn back the clock” and undue some of the progress that has been made?

The inauguration of Governor Gavin Newsom brought with it important questions about the future of workers’ compensation reforms enacted under Governor Jerry Brown’s administration. The general consensus from the expert panel reflected mostly uncertainty with a modest level of confidence that California’s new Governor will not address any major work comp issues during this session.

Panelists explained that for the time being labor advocates are not “clambering” for change; labor representatives perceive California’s system stability as a good thing for injured workers. Notwithstanding, it is expected that applicant attorneys will continue to make their argument opposing certain workers’ compensation statutes fueled by the perception that work comp does not take care of California’s injured workers.

Due to an abundance of issues that rank higher on Governor Newsom’s priority list, no major changes are expected in workers’ compensation this session according to the expert panel.

Question:  Where do you believe that more work needs to be done and do you think that the California WC system has an influence on whether employers stay, move out, or expand/contract in this State?

With the exception of the loss adjustment expense “mess” in California, the panel mostly focused on the rampant issues in Cumulative Trauma (CT) claims as an area overdue for improvement. The severity of the issue varies by region:  Northern California, the Central Valley, Southern California – and more specifically Los Angeles area.

Karen Fry of Commerce Casino provided an impassioned description of their experience with CT. “We’re on fire,” she explained.

It is estimated that 78% the casino’s claims are for CT. “It’s a money problem. Attorneys seemingly throw random things against a wall and wait to see what sticks. With Judges ruling in favor of the claims, it is becoming more difficult to determine what is real and what is not,” Fry explained.

According to The Cheesecake Factory’s Kurt Leisure, a primary challenge with CT claims is determining what is a legitimate claim and what is not. The panel concurred adding that with the cost to settle these claims ranging from $25,000 to $100,000, a sit-down is desperately needed to explore a more “equitable” approach to CT issues.

The panel agreed unanimously that California’s severe CT issues warrant immediate reform by the state’s legislature; no other state in the U.S. faces issues of this magnitude pertinent to CT claims. The panel further suggested that in order for a legislative effort to be successful, large prominent employers in Los Angeles will need to raise the issue by clearly communicating how CT impacts their business.

Even with all of its issues, the panel of experts agreed that California’s workers’ compensation system is making strides in the right direction. When asked if the complexities in the state’s work comp system has an influence on employers coming or leaving the Golden State, the expert panel mostly agreed.

The majority of industries are not adversely influenced by California’s workers’ compensation landscape. The ability to do business and tap into the world’s 5th largest economy (surpassing the United Kingdom) outweighs the challenges in the state’s work comp system. (LA Times 2018) Some restaurant chains, however, have expressed concerns and are “cautious” about doing business in California.

Question:  We hear a lot about automation coming into the workers’ compensation system from streamlining billing, telemedicine, wearables, predictive modeling, etc.  In your opinion, where does technology fit in best with respect to the administration of our workers’ compensation benefit delivery system and where do we need to make sure that it does not go too far?

The value of automation and technology, as expressed by the expert panel, is multidimensional. There are gaps in communication where technology fits in very naturally.

Technology can be immensely valuable in helping to communicate effectively with injured workers who do not speak the English language. Technology, such as Telemedicine, is making great strides in solving access to medical care issues created by California vast geographic footprint.

While some technology has produced undeniable benefits in some areas, there are notable limitations. The panel identified a growing challenge with automation technology developed for the purpose of engaging the injured worker – it is being ignored by workers and therefore rendered ineffective.

Consensus among the experts concluded that the successful administration of workers’ compensation benefits to injured workers heavily relies on human intervention. “Injured workers are people,” explained Jeffrey Einhorn of Non-Profits’ United. “They must be reached and have work comp explained to them on a human to human basis. If workers are not the most valued asset, we have a problem,” Einhorn continued.

With the erosion of the human element comes a greater risk of the injured worker feeling alienated and lost in the process. The likelihood of litigation increases as the level of support for the injured worker decreases. The business of workers’ compensation at the core is built around people. Automation and technology can simplify certain tasks, create efficiencies and bridge important gaps, but it must never replace human intervention.

The stakeholder and employer panel provided one of the more insightful presentations of the conference. All presenters were engaging, charismatic, and well-informed.

Numerous other questions were addressed that are not covered here, but will be included in future blog posts. Organizers of the event, and of this particular panel, should be commended for pulling together a great group of subject matter experts who clearly care about the ongoing improvement of California’s workers’ compensation system. Thank you for a job well-done. 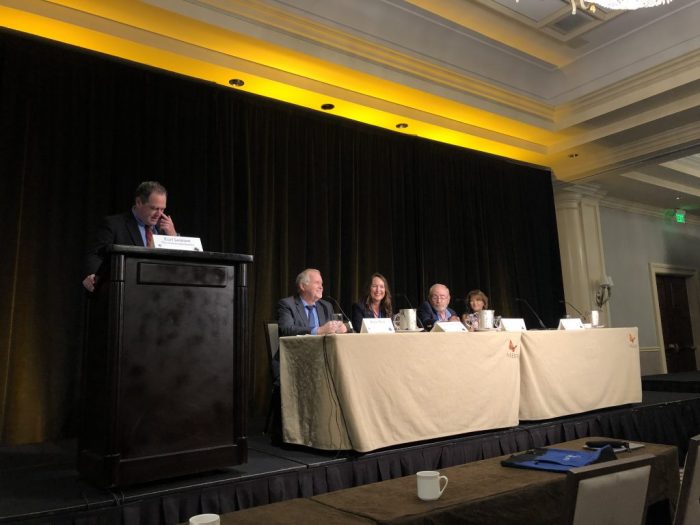 For more than a decade, Carlos Luna has been a trusted adviser to stakeholders in healthcare, claims, utilization review, managed care, insurance, and government agencies in workers' compensation. His consultation focuses on effectively incorporating Evidence-Based Medicine (EBM) content and tools into claims and clinical workflows to achieve improved healthcare, return-to-work, and financial outcomes.

A recognized thought-leader on national workers’ compensation issues, Carlos’ blogs have been published by industry-leading publications such as WorkCompCentral, WorkCompWire, Insurance Business Magazine, Louisiana Comp Blog, and more. He was named a “New Leader in Workers’ Compensation” by WorkCompWire in 2017 and was featured as LegalNetInc.com’s “Thursday Thought Leader” in 2018.

A regular speaker on regional and national workers’ compensation conference circuits, he has become a guiding voice within key regulatory focused associations such as the International Association for Industrial Accident Boards (IAIABC) and the Southern Association of Workers’ Compensation Administrators (SAWCA).

Recently On My Mind

All content provided on this blog is for informational purposes only. The owner of this blog makes no representations as to the accuracy or completeness of any information on this site.

This terms and conditions is subject to change at anytime with or without notice.