During their 40th Annual Forum in Monterey, California, the Agricultural Personnel Management Association (APMA) took a deep dive into the Farm Workforce Modernization Act of 2019 (H.R. 5038). The bill is aimed at modernizing the H-2A temporary agricultural employment of foreign workers, or guest worker program. The conversation on 5038 is meaningful as thirty-three (33) years have passed since the House of Representatives passed a bill that aims to resolve agriculture’s unique labor challenges (Regelbrugge, C. (APMA 2020). All About the Workforce.).

H-2A is designed to allow U.S. employers, who meet specific regulatory requirements, to bring foreign nationals to the United States to supplement their workforce and fill temporary agricultural jobs. During a 3-hour panel discussion, San Diego-based grower West Coast Tomatoes and Nipomo-based Castañeda & Sons, Inc. Farm Labor Contractor (FLC) shared best practices necessary to stay compliant with H-2A requirements (i.e., provisioning housing, food, and transportation for guest workers) and optimizing recruitment efforts for high-quality, experienced temporary workers from Mexico. Their comments made it clear that without access to temporary labor via the H-2A program, it would be nearly impossible for their operations to exist.

The cash receipts quantified by USDA ERS do not include the impact agriculture has on other business verticals such as shipping and warehousing, that are larger parts of the State’s economy. In all, agriculture’s contribution to California’s state economy is material with roughly 77,100 farms and ranches located throughout the Golden State.

California’s ongoing labor shortage, however, presents a formidable challenge for growers within the State, and around the country, to meet the demands of produce retailers. Experts consider the program designed to help agriculture employers supplement their workforces with temporary labor to be materially antiquated and in need of modernization.

A survey of 1,071 farmers and ranchers, conducted by the California Farm Bureau Federation (CFBF) in conjunction with the University of California-Davis in 2019, found that 56% of the survey’s respondents reported being unable to employ an adequate number of workers at some point during the previous five years. Of the farmers reporting the labor shortages, at least 70% stated the issue was more pronounced during the two (2) years preceding the survey, 2017 and 2018 (CFBF, Apr. 2019).

CFBF’s survey also discovered that in spite of increased wages (86% of respondents reporting raising wages) and the use of labor-saving technology and mechanization (56% reported their use), the labor shortage and issues with decreased production persist. 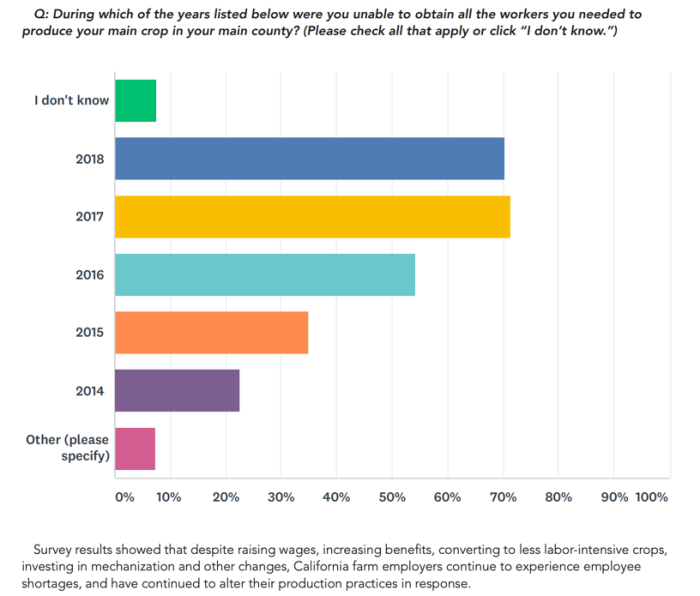 One of the survey’s respondents stated, “We have had to decrease our strawberry and pole tomato plantings because of lack of labor. We have reduced strawberries from 80 to 17 in 2018; we had to walk away from half the field because we did not have enough employees to harvest the whole field. This year we only planted 9 acres of strawberries. Tomatoes have been reduced from 80-100 acres to 25 acres. We have had to increase our winter squash planting to 90 acres in 2018 because this crop does not require much labor to grow or harvest compared to strawberries and tomatoes. We need 125 people but have only been able to retain 40-45 employees.”

When survey respondents were asked if they had enrolled in the H-2A visa program to help supplement their workforce during the past five (5) years and bring in guest workers, the vast majority said NO with only 6% stating YES.

One farmer stated, “H-2A visas aren’t practical for small growers in our area. We really need immigration reform that is practical for all growers, including portability options.”

The complexity and scope of H-2A can be daunting for many growers, particularly smaller operations. During the APMA’s H-2A panel discussion, Ruben Lugo, US DOL Wage and Hour Division-Western Region, Ag Enforcement Coordinator, suggested that growers consider assigning a dedicated person to administer their H-2A program in order to maximize adherence to the programs requirements and take full advantage of the program’s benefits. Human capital is often stretched thin within smaller farming operations making it impractical as the CFBF study reflects.

If H-2A is to become a viable option for all growers, small and large, the program’s modernization and simplification will be increasingly important.

Contained in a bill summary published by the House of Representatives are three (3) main elements to the Farm Workforce Modernization Act: (Title I) Earned Status for Certified Agricultural Workers (CAW), (Title II) Improving the H-2A Program, and (Title III) Mandatory E-Verify for the Agricultural Sector.

According the House’s summary, the bill is a response to President Trump’s call for merit-based immigration reform and meets the “desperate need” of America’s farmers and ranchers for a legal, reliable workforce. H.R. 5038 does this by requiring a significant commitment for past and future work from current agricultural workers as part of a stringent employment-based program. Provided specific criteria are met, workers may be eligible to receive a renewable five (5) year visa and potentially Lawful Permanent Resident (LPR) status.

An element of significant importance to smaller farming operations is Title II, proposed improvements to the H-2A program. Under H.R. 5038, the amount of time and cost spent on the program by growers would decrease, making a temporary legal workforce more accessible. The bill also modernizes and applies caps to “out-of-control wage growth” in the Adverse Effect Wage Rate (AEWR).

In addition to decreased time and cost, the bill promises to streamline the processing of H-2A applications and pilot a portable H-2A visa program to allow employers and farmworkers to respond more dynamically to labor needs. This element of the bill focuses on making the H-2A program more responsive and user-friendly for employers.

The third element of the bill is widely considered the compromise by employers. It establishes a mandatory, nationwide E-Verify system for all agricultural employment deployed using a structured phase-in and guaranteed due process for authorized workers who are incorrectly rejected by the system.

According the Congressman Panetta, the legislation was put together over a period of nine (9) months with input from agricultural stakeholders and labor organizations and was introduced with the support of 26 Democrats and 23 Republicans.

Congressman Panetta also explained to an audience of growers, FLCs, and other agriculture stakeholders in Monterey, CA during the APMA conference that the push for mechanization and immigration reform will ease the pressure being experienced by farmers due to the labor shortage in agriculture.

In a press release published on Congressman Panetta’s website, Congressman Mike Simpson stated, “I am thrilled to see the Farm Workforce Modernization Act pass the House with a strong bipartisan vote. Idaho farmers and ranchers have been asking me for years to address their labor needs and this bill takes an important step towards solving this issue…It isn’t a perfect solution but compromise rarely is. The bill balances strong immigration enforcement with common sense reforms that allow our farmers to access a legal workforce without granting any special pathways. I hope the Senate can move similar legislation so we can sign a solution into law.”

With this in mind, the ongoing labor shortage in agriculture has prompted some employers to hire workers who are less qualified, inexperienced, untrained and unfamiliar with the rigors of the agriculture work environment, in an effort to fill the available positions as they scramble to meet production demands.

The byproduct of hiring less experienced and less qualified employees is the prospect of added risk to the grower and their workers’ compensation insurers. These employees can be more prone to work-related injuries, which may fuel workers compensation incident frequency and overall loss activity.

With agriculture, food, and related industries contributing $1.053 trillion to U.S. gross domestic product (GDP) (USDA ERS 2017), the stakes are very high to come up with a viable solution to address the industry’s seemingly perennial labor shortage.

“When it comes to Agriculture, things get done. They get done in a bipartisan way,” proclaimed Congressman Panetta during his speech at APMA. “Bipartisanship is still alive in agriculture,” he continued as he expressed a sense of optimism when asked if he felt whether Republicans in the Senate would pass the bill.

Time will tell if the U.S. Senate will prioritize production over politics as they prepare to deliberate to pass the Farm Workforce Modernization Act, or choose to develop similar legislation. Stay tuned.

For more than a decade, Carlos Luna has been a trusted adviser to stakeholders in healthcare, claims, utilization review, managed care, insurance, and government agencies in workers' compensation. His consultation focuses on effectively incorporating Evidence-Based Medicine (EBM) content and tools into claims and clinical workflows to achieve improved healthcare, return-to-work, and financial outcomes.

A recognized thought-leader on national workers’ compensation issues, Carlos’ blogs have been published by industry-leading publications such as WorkCompCentral, WorkCompWire, Insurance Business Magazine, Louisiana Comp Blog, and more. He was named a “New Leader in Workers’ Compensation” by WorkCompWire in 2017 and was featured as LegalNetInc.com’s “Thursday Thought Leader” in 2018.

A regular speaker on regional and national workers’ compensation conference circuits, he has become a guiding voice within key regulatory focused associations such as the International Association for Industrial Accident Boards (IAIABC) and the Southern Association of Workers’ Compensation Administrators (SAWCA).

Recently On My Mind

All content provided on this blog is for informational purposes only. The owner of this blog makes no representations as to the accuracy or completeness of any information on this site.

This terms and conditions is subject to change at anytime with or without notice.